In 2003, the New Mexico Regional Transit District Act (Chapter 73, Article 25, NMSA 1978) was passed, enabling the formation of multi-jurisdictional transit agencies. The purpose of this legislation was to: 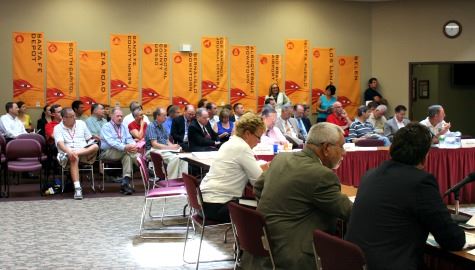 In 2004, legislation was adopted allowing such transit districts to levy up to a half-cent local gross receipts tax (GRT) to fund their operations.

On March 29, 2005, the New Mexico Transportation Commission approved the formation of the Mid-Region Transit District, encompassing Bernalillo, Sandoval, and Valencia counties, as well as most of the cities, towns, and villages within those counties. At the same time, the Mid-Region Council of Governments (MRCOG) was proceeding with plans for commuter rail between Belen and Santa Fe - the New Mexico Rail Runner Express - which began operating between Downtown Albuquerque and the U.S. 550 Station in July 2006. The service soon expanded to Los Lunas and Belen, and in December 2008 the route was completed as trains began running to Santa Fe.

In 2008, the Mid-Region Transit District was renamed the Rio Metro Regional Transit District, and that year voters in the three counties approved a 1/8-cent gross receipts tax to fund Rio Metro, with half of the revenues dedicated to rail and half to the overall Rio Metro system. In 2009 the tax took effect and Rio Metro assumed management of the Rail Runner from MRCOG. Rio Metro began providing bus service in 2010 after consolidating several small transit agencies in Valencia and Sandoval counties, and it also began providing whole or partial funding to some ABQ Ride routes of regional significance, enabling ABQ Ride to extend its services to the Rail Runner and Rio Rancho.

The Board of Directors is responsible for carrying out the functions assigned by the provisions of the Regional Transit District Act including establishing financial, management, service operation, fare, and other policies that support the operations of the transit system. The day-to-day operations of Rio Metro are the responsibility of the agency Director and program staff.

The Rail Runner is New Mexico's first commuter rail service. Inaugurated in 2006, it provides service seven days a week to 15 stations along a 96.5-mile corridor that runs through Valencia, Bernalillo, Sandoval and Santa Fe counties, linking numerous communities and tribes.

Rail Runner trains operate from approximately 4:30 a.m. to 10:30 p.m. on weekdays, with an emphasis on the morning and evening commutes. Service is supplemented by Rio Metro buses on certain early morning routes. There are fewer trains on weekends, with service hours running from approximately 8 a.m. to 10:30 p.m. on Saturdays and 8 a.m. to 9 p.m. on Sundays.

The creation of partnerships with other transit providers has resulted in more than 60 connections to other transit services. Improvements to the Job Access Reverse Commute (JARC) program, including the use of transit passes, improved overall program access, and the development of key partnerships have increased service response and participation. Effective marketing and transportation demand management (TDM) efforts to promote the Rail Runner and Rio Metro "brands" and services, such as the popular electronic newsletter, the "Dump the Pump" campaign, the award winning Smart Business Partnership Program, and Rio Metro branding, all create a recognizable image for the agency and a unified identity for all Rio Metro services.